In this post, I’ll provide an overview of the simplest and cheapest blood-based clinical biomarker used to provide diet personalization: glucose.

You’ll learn how to manage glucose to improve metabolic health and reduce future disease risk, by using an inexpensive at-home glucose measurement device ($30 or less) known as a glucometer. The management of glucose also facilitates weight loss, although the details and mechanisms of which are outside of the scope of this post.

In future posts, I’ll provide further diet personalization options, in order of escalating costs and complexity, starting with Continuous Glucose Monitors (CGMs), and then all the way up to (yet) unscalable multi-omic approaches to diet personalization. Some people, particularly those uncomfortable with finger pricking to draw blood, may wish to start directly instead with a CGM. Two excellent options are Levels Health and NutriSense.

Note: this post is reader agnostic. It is intended to be accessible to everyone, without requiring prior knowledge. Business customers requiring glucose, omic, or GKI-based personalization via API, with or without consumer device support, should contact us. We can also automate nutrition personalization according to other methods e.g. insulin index, or a combination e.g. nutrient density and satiety index, or even factors related to lifestyle goals, e.g. estimated carbon footprint.

A glucometer (also known as glucose meter) is a blood-sugar monitoring device used by diabetics. However in our non-diabetic case, we’ll use a glucometer to personalize diet.

The device only requires a single drop of blood, is small and portable, allowing you to take one with you on-the-go, and can be used anywhere at any time. Although very convenient and cheap, they provide a fairly accurate measurement of the biomarker glucose.

Why Test Your Glycaemic Response to Food?

Seemingly unlimited sources of food surround us, many of which claim to be “healthy”. But despite this affordance, with multi-decade sky-rocketing obesity and chronic disease, America is sicker than ever.

Research shows that in 2018, 80% of consumers found conflicting information about food and nutrition, and 59% say that makes them doubt their choices.[1]

To cut through this increasing noise, we all must start using tools and services to provide objective and personalized data.

With every bite we eat, we impact whether we’re moving towards optimal health or dysfunction (including accelerated aging). We must determine our unique diet to support our peak performance. An excellent and necessary first step is determination of our glucose response to foods.

Research shows that high blood sugar levels (blood sugar and blood glucose are synonymous and I’ll use them interchangeably) increase the risk of chronic disease, even when in the “normal” range (more on that later).

Post-meal spikes can be particularly damaging to health and minimizing them should be a priority. Glucose levels should be kept “steady” over time for best health outcomes.

A core building block of an optimal diet is healthy glucose regulation.

Different people can have very different glycaemic reactions to the exact same foods. In one study, Eran Elinav and Eran Segal, researchers at the Weizmann Institute of Science in Israel, looked at how people’s blood sugar responded to eating white bread and the supposedly healthier option of artisanal sourdough bread. Surprisingly, an equal number of people responded positively to white bread and negatively to artisanal sourdough bread as the reverse.[2]

Why responses to the same food can be so varied, to the point of even being contradictory, appears to be centered on people’s gut microbiome. Depending on the specific bacteria in a person’s intestinal tract, the way that food is processed can be much different. However personal genetics, lifestyle, physical activity, and body type, also play an essential role in fasting glucose, and glucose spikes following a meal.

Universal dietary guidelines may be of more limited use, considering such wildly different individual responses to a food.

A person’s exact response to a meal can’t be predicted based upon carbohydrate content. Nor can standardized scoring systems like glycaemic load or index. Nether are personalized enough. 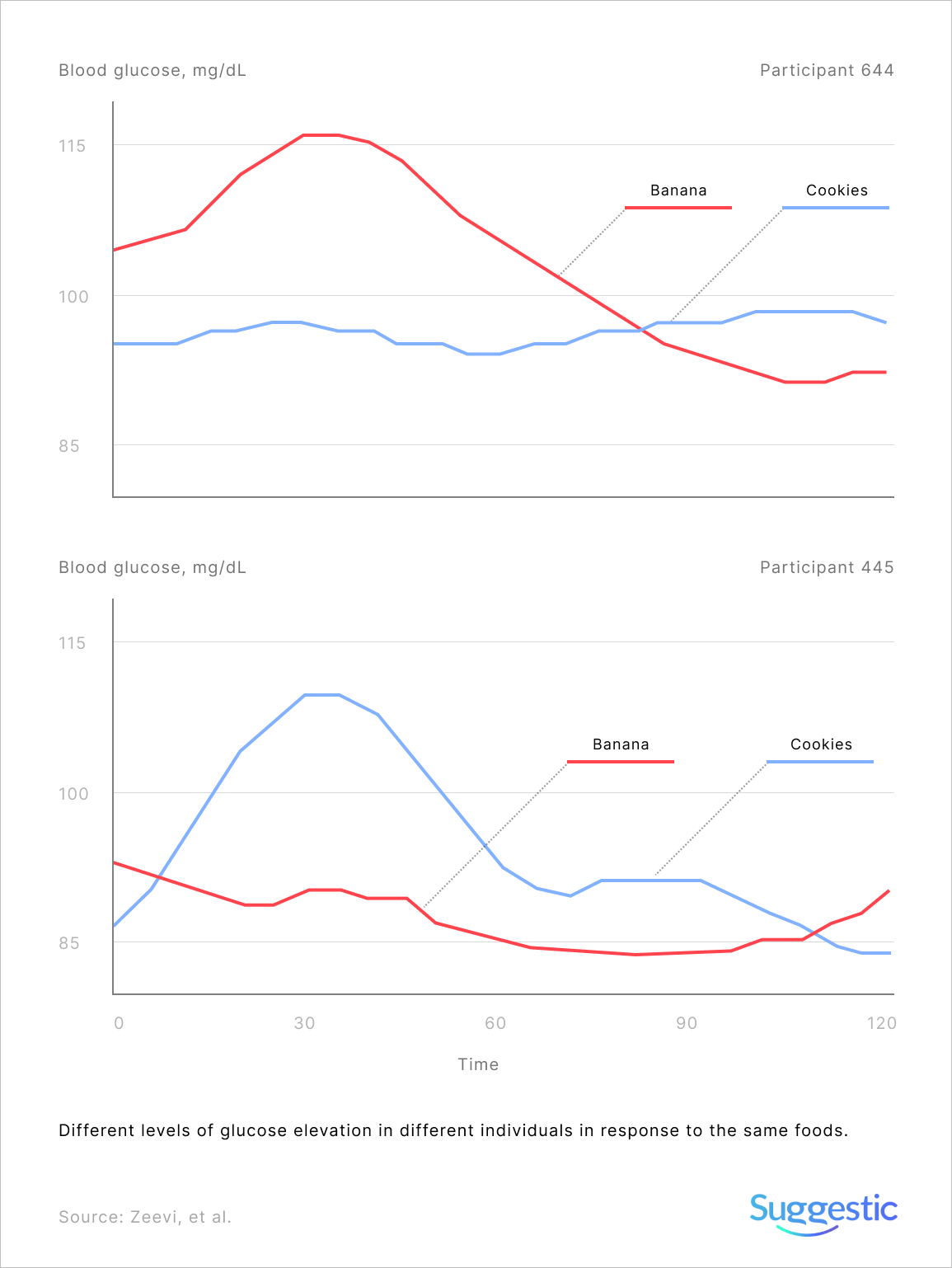 It’s true that low glycemic index diets can reduce post-meal glucose elevations, and that a diet’s glycemic index is a good predictor of blood sugar fluctuations, however more recent research shows that two peoples’ glucose responses can vary significantly, even after eating the same food. You’ll need to invest some effort to optimize your diet to you. 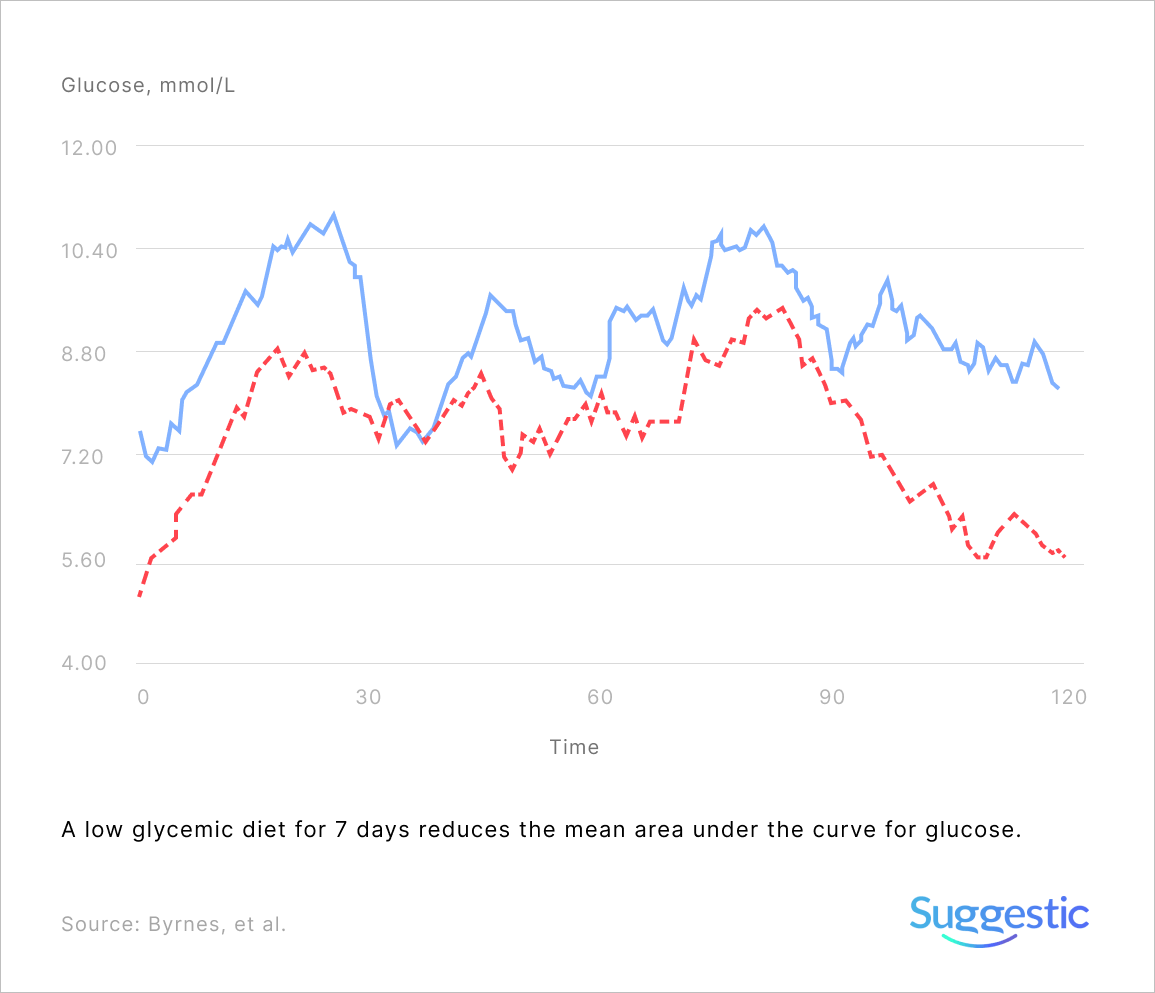 The mechanisms that link glucose spikes with chronic disease may include oxidative stress and inflammation. Both are factors that correlate with the aging process, and the more of either during the course of a lifetime, the faster we age.

In light of the present COVID-19 pandemic, it is worth noting that elevated glucose levels may facilitate disease progression and may help explain much of the differences in disease severity seen across the population.[7]

How to Test Your Food

There are two primary ways to measure your blood sugar: a finger-prick glucometer or continuous glucose monitor. In this first post, I’ll be focusing on the former.

The packaging should have instructions for basic operation of the device.

It’s important to wash your hands before taking a measurement.

You can test food individually (e.g. an apple) or complete meals. You’ll probably want to test food that you normally eat first. Later on you can try testing food that you think is problematic or if one of your meals had a higher blood sugar response than you would like, you can try variations of that meal (e.g. by adding fat such as butter).

The first step is to measure your fasting blood sugar – also known as Fasting Blood Glucose (FBG). You should have fasted for at least 8 hours. In most cases, for most people, this will be following sleep and before the first meal of the day (i.e. typically breakfast).

The purpose of the measurement is to establish a baseline that will be useful to compare against for the rest of the day.

Decide Which Food to Test

Test every half hour after you begin eating until you are within 20 mg/dL (1.1 mmol/L) of your baseline again.

If testing five times per meal (pre meal, then 30, 60, 90, 120 minutes post meal) is too onerous, in most cases it’s sufficient to test just twice, once pre meal (if within baseline range, else delay eating and repeat), and once at the one hour mark after the start of eating. In most cases this is sufficient to identify problematic foods because blood sugar tends to peak about an hour after eating, and declines after that. But for the first few days at least, try to perform all five tests per meal.

Test enough foods or meals so that you build a sense of your normal response curve. This includes the magnitude of the initial spike and the length of time it takes you to get back to within 20 mg/dL (1.1 mmol/L) of your baseline (you’ll need to do all five tests to see this curve in full). Any food above your normal values (either the spike or the “elevated” duration) put on your “bad” list and try to avoid.

How to Interpret your Results

A high number, even when in the non-diabetic “normal” range is a strong predictor of developing type 2 diabetes[8], an independent predictor of cardiovascular disease (e.g. heart attacks) and strokes.[9][10] 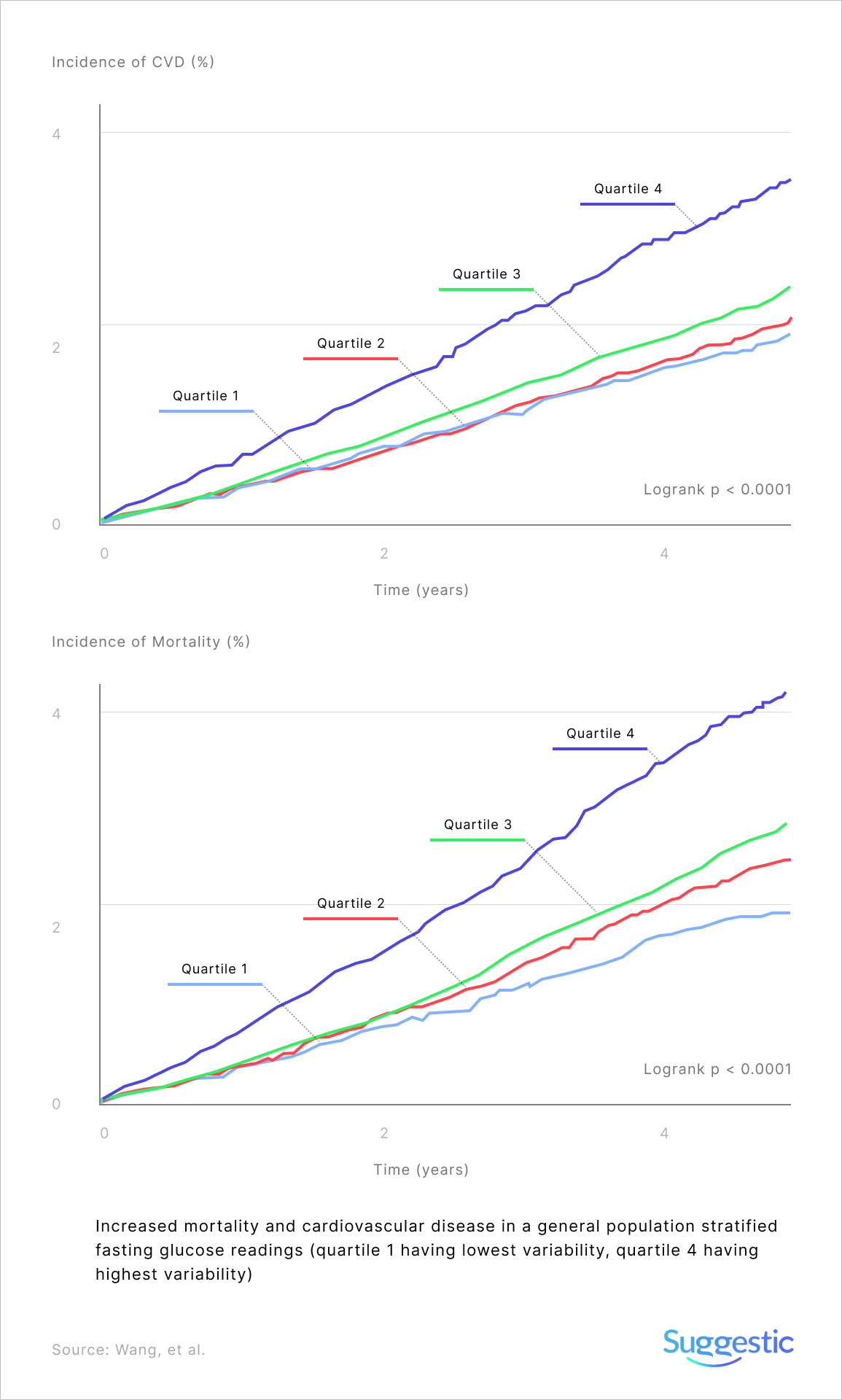 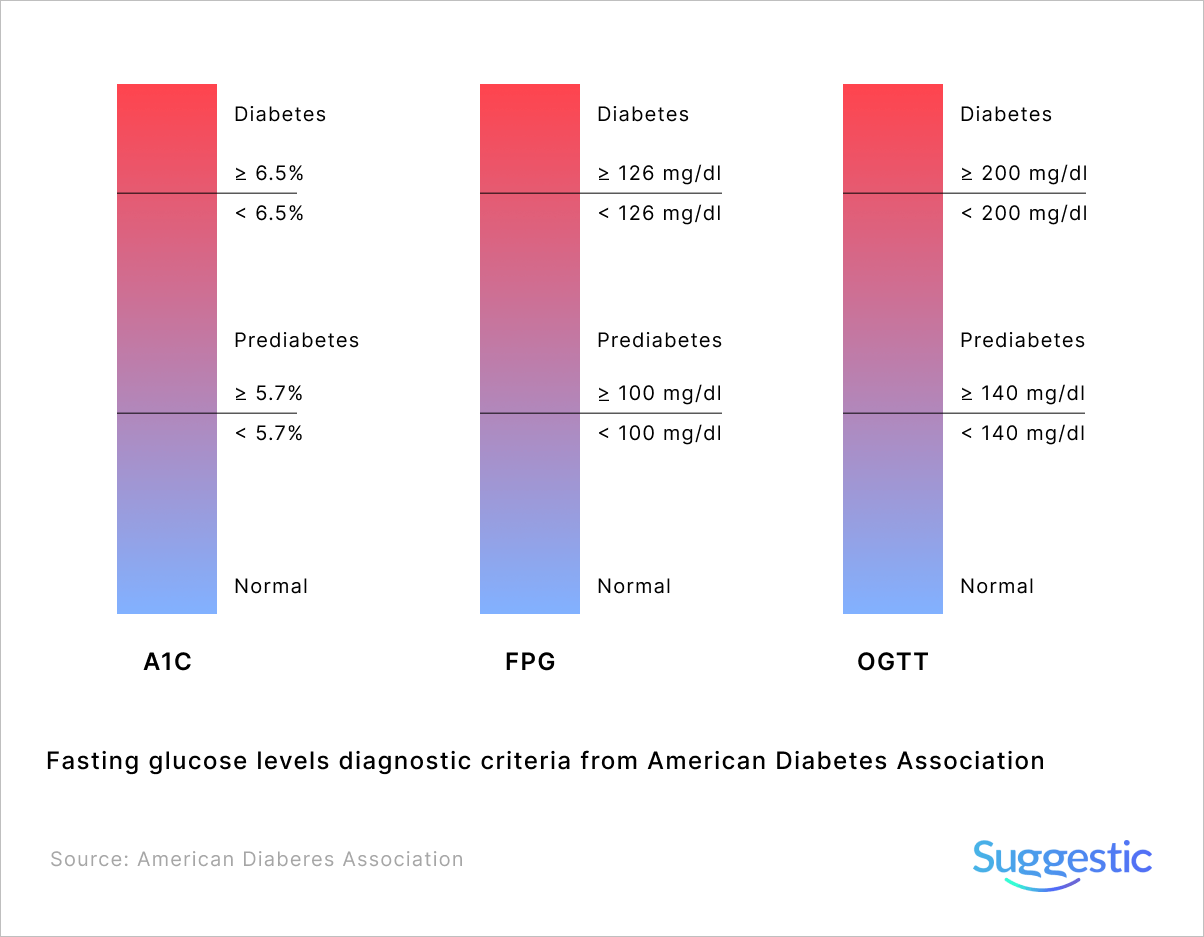 As fasting glucose increases from under 81 up to 99 mg/dL (that’s 4.5 mmol/L up to 5.5 mmol/L), there’s an increase in the risk of developing diabetes by as much as three times [11], despite meeting the criteria for “normal” fasting glucose.

Well below the “normal” fasting glucose level cut-off of 100 mg/dL (5.6 mmol/L), at around 90 mg/dL (5 mmol/L), risk begins and sharply increases for cardiovascular disease risk (disorders of the heart and blood vessels) including heart attacks, and thrombotic stroke (wherein a blood clot forms inside one of the brain’s arteries, leading to possible brain damage). 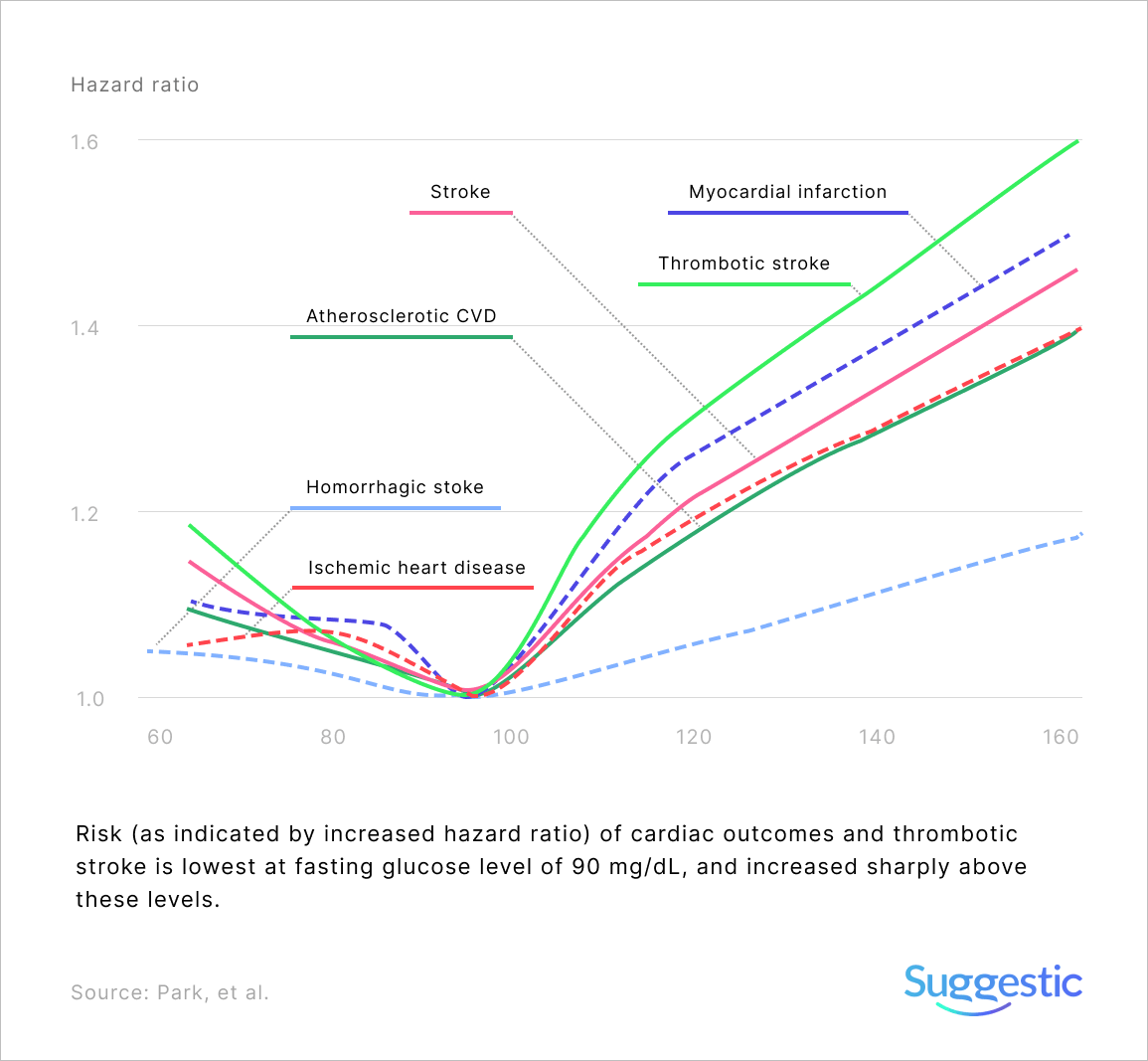 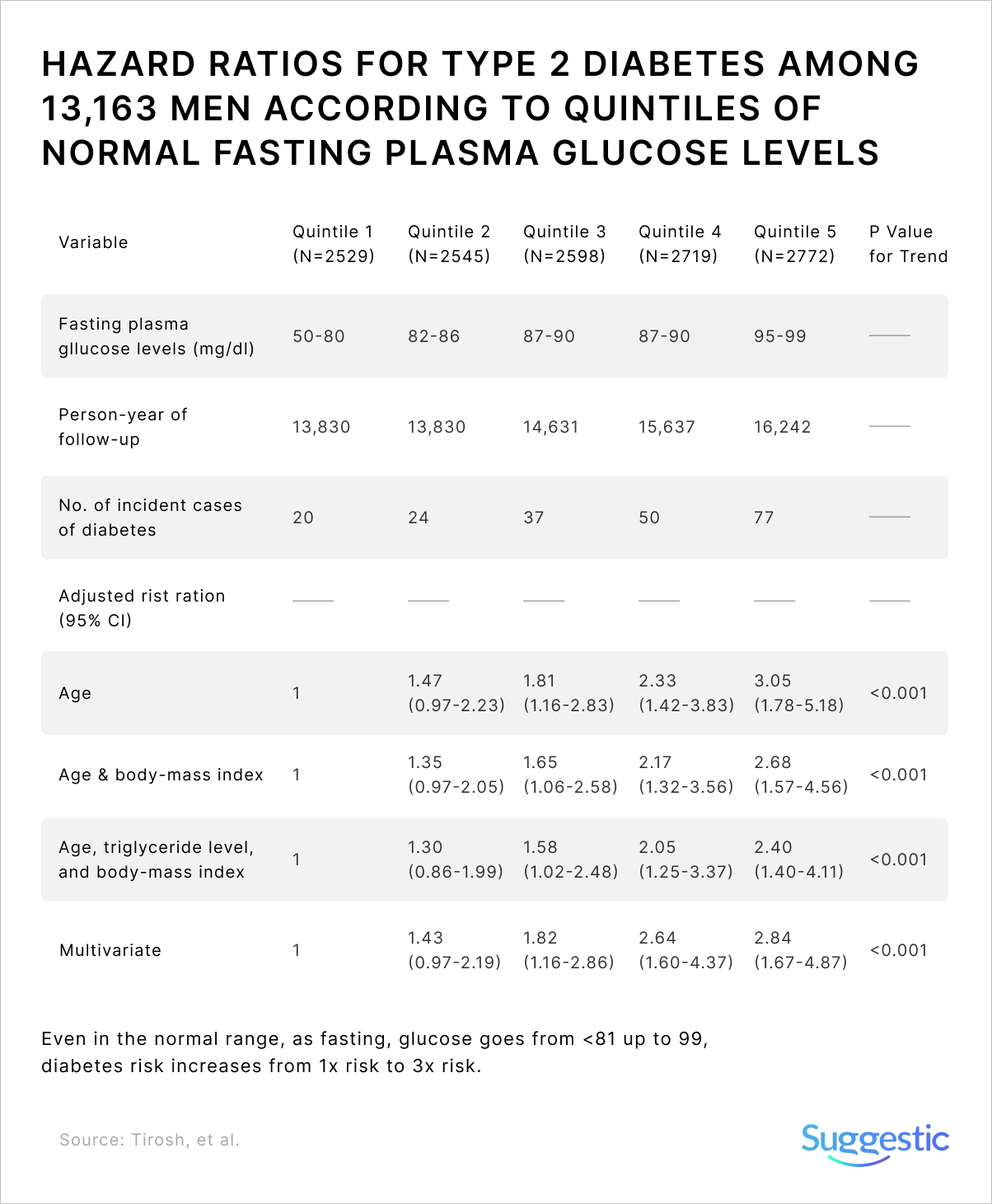 Healthy individuals should rarely exceed 140 mg/dL (7.8 mmol/L) after a meal, and glucose should revert to pre-meal levels within two to three hours.[14][15]

Based upon literature, a person seeking optimal health and maximum future disease-risk reduction should aim to keep their glucose below 100 mg/dL (5.6 mmol/L) for the vast majority of the day and rarely ever exceed 120 mg/dL (6.7 mmol/L).
An optimal diet should take into account the diet’s effect on keeping fasting glucose on the lower end of the normal range and minimizing variability between test-to-test fasting levels.

Poor glycemic regulation isn’t just about having higher glucose levels; it’s also about having increased variability (large swings in glucose levels, known as glycemic variability, GV). You are limited in measuring GV using a finger-prick glucometer, as you can’t capture continuous data, only odd snapshots when you draw blood. This is one of the advantages of a continuous glucose monitor. It’s able to accurately capture the tip of peaks and the bottom of troughs. I’ll be covering it in a future post. 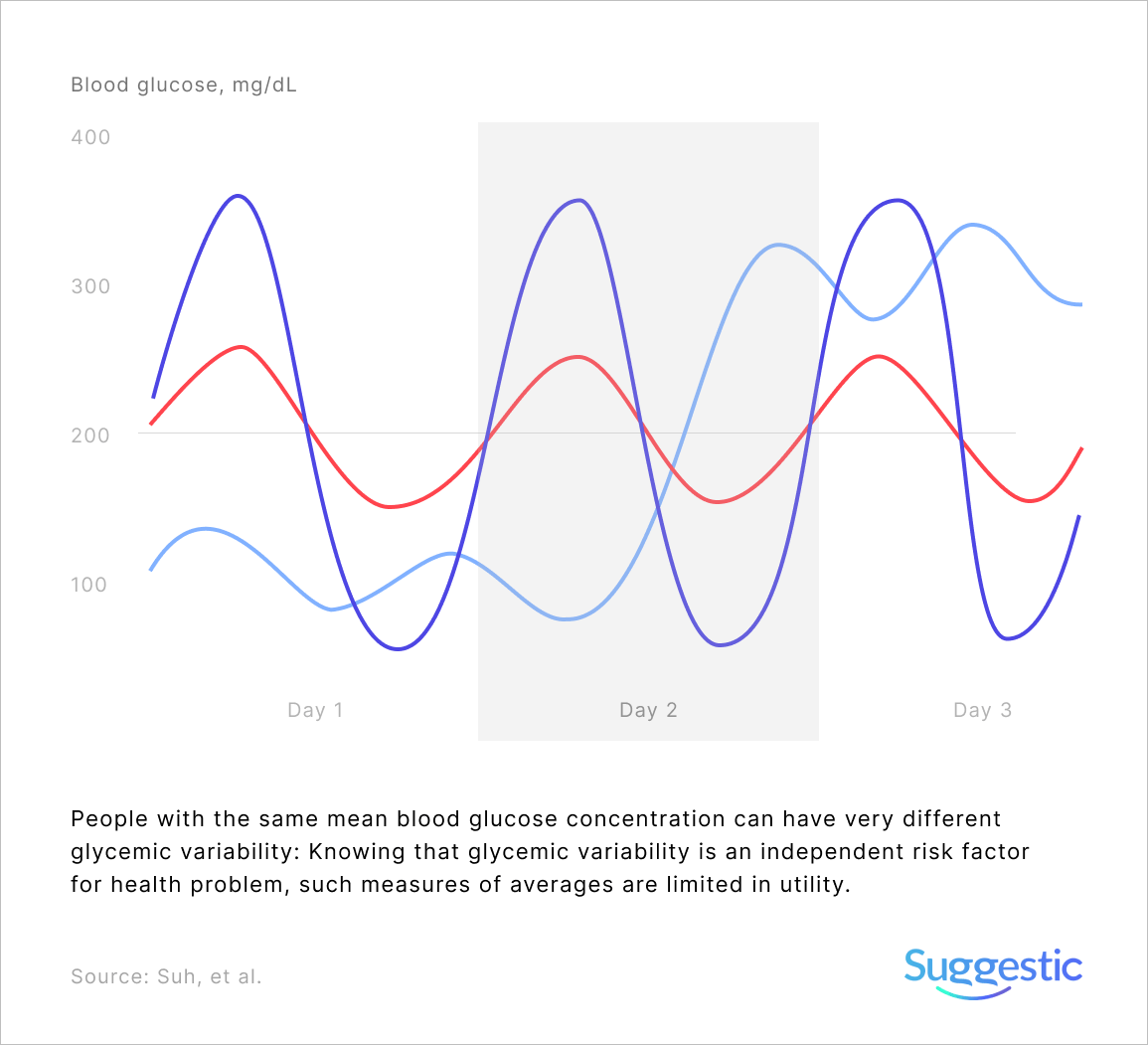 However, it’s worth noting that GV increases (fasting and post-meal) as people move along the continuum from normal glucose regulation toward diabetes and that GV is an independent risk factor for health problems that are potentially more harmful than sustained high glucose levels alone.

The good news is that significant improvements can be achieved with dietary and lifestyle changes. Testing your unique responses to food with a glucometer, is the cheapest, most effective first step. Even those individuals whose results fall within the range of prediabetes, may be able to reduce their future risk of diabetes by up to 70%.[18]

A glucometer enables us to start linking the meals we eat with our metabolic health. By making better informed choices, we can reduce the risk of developing diabetes, heart disease, some cancers, and metabolic health in general (e.g. insulin sensitivity).

I look forward to a world where we all have post-meal spikes, glycemic variability, and fasting glucose tracked automatically.

The information on the Suggestic website is provided for informational purposes only and with the understanding that Suggestic is not engaged in rendering medical advice or recommendations. These statements have not been evaluated by the Food and Drug Administration. This information is not intended to diagnose, treat, cure, or prevent any disease.